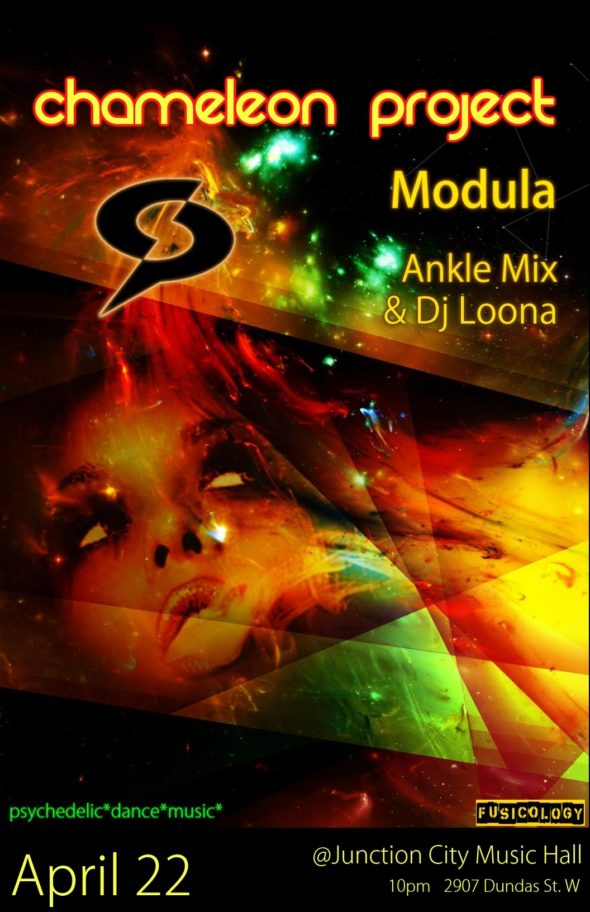 Chameleon Project returns to the cozy confines of the Junction City Music Hall for another evening of live psychedelic dance music. Joining the project for this voyage will be Ankle Mix and DJ Loona, providing the finest in boutique electronica and funkdafied beats before, after and in between sets. There is also a special guest to be announced, more details to follow.

Tune in, Turn on and Blast off with us…

Often compared to such disparate bands as Bonobo, Medeski Martin and Wood, STS9, John Scofield, Thievery Corporation, Soulive, and the Disco Biscuits, The Chameleon Project mixes elements of the past with modern innovations into a signature style that is full of infectious, syncopated grooves. Combining the dissonance of jazz and the liquidity of electronica, the music is a truly chromatophoric experience, frequently changing tonal colors much like the amphibian for which the band is named.

With a focus on rhythm and texture, the band centers around Snappy Homefry on bass and Kevin Lee on drums (and samples). Band founder Josh Laing provides melodic interest on guitar, FX and real-time sampling, and Jordan Quinn rounds out the sound on keys. Avid students of music history and theory, this introspective group paints with a diversely curated palette to create a sound that expands on their respect for past masters and forge something totally new.

From playing a rave at some underground warehouse to a jamband festival, The Chameleon Project has attracted fans from across the spectrum. With the recent release of their album “Funk n’ Space” (2016), the band regularly tours Canada and the Northeast US. They have shared the stage with Lotus, Bassnectar, Keller Williams, EOTO, DJ Shadow, and The New Deal, to name a few. Their festival chops include Camp Bisco, Evolve, Freedom Festival, Illumination Festival and the NuJazz Festival.
Combining the authenticity of live music with the psyche of electronica, The Chameleon Project adds a human element to traditional electronica. Their shows are pulsating dance parties whose energy is contagious. This is music for your mind, and your body.

Modula is an electronic duo that fuses live synth and electric bass with drum machines and sampling to create a unique blend of Psychedlic Techno. Both trained jazz musicians, Jason Gardiner and Scott Hunter met at the prestigious Humber College music program. Initially, both Scott and Jason steered their focus solely to jazz, however it wasn’t long before their mutual love for electronic music brought the two together, while each worked on their own respective electronic projects. Once finished school, the obvious next step was to start a new project that Jason and Scott could collaborate on, something that could apply their background in jazz and improvisation to their love of Psytrance and Techno.

The two began working on a concept, and with each passing jam they found more ways of applying their improvisational skills to techno and Psytrance. Gardiner triggering drum loops and samples while improvising melodies played on synth patches designed on the fly. Hunter using the electric bass to provide pulsating bass lines, counter melodies and rhythms played higher up on the instrument through a variety of stomp box effects. Using these tools, the duo was able to spontaneously create hard-hitting techno beats with vast psychedelic sonic landscapes.

Upon playing their first show at Burdock to a hyped Psytrance crowd, buzz quickly began to spread around the psytrance and techno scene about Modula’s fresh take on live electronic music. The following weekend the band charmed festival goers at Wild summer festival with their unique set up and live performance style. Since then Modula has been lighting up the Toronto Psy scene with its original spin on Psychedelic Techno.